Homeschooling on a budget (A few tips and tricks)

First of all I'd like to start out by saying Jesse is in 1st grade and since he has Down syndrome it's kind of hard to just go buy a curriculum for a 1st grader that would be tailored to him. Not to mention the state of Michigan sets the bar pretty low for what they expect. So, I've made my own curriculum for him using some ideas from online and from books I get at Barnes & Noble. I have a membership so I get deals and in addition to that when you buy a work book cut the pages out with a razor blade. Then you can make copies of the pages and get more use out of each book. I do worksheets with Jesse every day and sometimes when he needs a little extra time on a specific area we do the same worksheet a couple times a week until he gets the hang of it. So even though I might spend $10 for a work book, I'm making copies of the pages and definitely getting my money back.

Another great resource is Pinterest. If you don't have an account set up with them I suggest to everyone to get one. From recipes, crafts, DIY, fashion, & education it's all there. I swear you will be addicted once you start. Anyway, just go to Pinterest and search under education or kids. There are a ton of resources and ideas on there. Here's my education board. Check it out to get an idea of the things you can find. it's an amazing website and I promise you that you will be able to find a ton of things to help you homeschool your child.

Anyway there are some tips and resources for ya for now. I'll start posting more specific and in depth things we do here at home.
Posted by momtojesse at 4:23 PM No comments:

Just a quick update from the Baker homefront

Jesse and I are doing amazing! Life has thrown us some serious curve balls the past few years, but we came out on top.

I have been homeschooling Jesse since October due to our school system being horrible here in this small town. I was nervous about starting the homeschool process, but I soon realized it's not really any different than what I've always been doing with Jesse. The only difference really is that I now don't have any break from Jesse. He has made so much progress since I've been homeschooling it's crazy. It really proved that he wasn't getting what he needed from the school and his teacher this year. I tried to fight for what Jesse needed, but due to neither side willing to budge and Jesse being terrified of school I chose to pull him out.

I plan to start blogging regularly again to share our journey in homeschooling and just share all things Jesse. I mean come on who can get enough of this kid? I sure can't. He's great!

Anyway, I'm back and hoping to try to do at least 1 new blog every week. 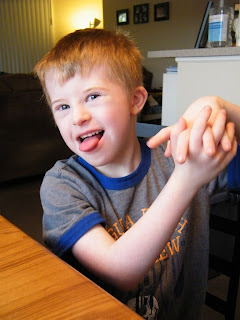 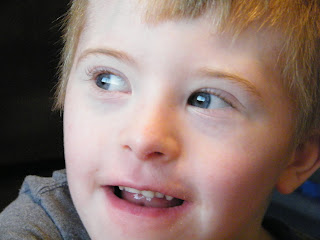 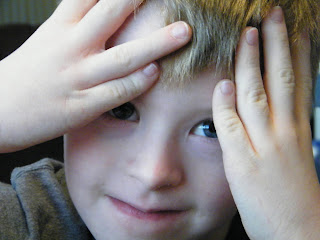 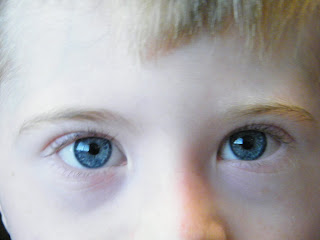 Posted by momtojesse at 11:50 AM No comments:

My view of the use of the "R" word

At first I heard friends from my DS community talk about how they didn't like the "R" word. I guess I never really thought about it back then and how much it really did affect me. You see that word is used to slam people and well that had to come from somewhere. It came from the term "mentally retarded" which is very close to home for me. Down Syndrome is a form of mental retardation. So when I hear people use the "R" word I see it as a slam to Jesse.

A few years ago Jesse was playing in my living room and a neighbor came over. I can't remember what Jesse was doing, but she looked at Jesse and said "what are you retarded or something?" WHAT???? OMG did you really just say that to MY son? My sweet baby boy. All the sudden that word hit so close to home. I was FURIOUS. I didn't even think to educate her about the use of the word. I just told her to leave before she went flying through my front door. Then all the sudden my views totally changed on people's choice of words.

Since then I've always tried to educate people about the "R" word and why I don't like it. Most people understand right away because they know and love Jesse, but there are some who just don't understand why it's so bad. Well, it's kind of like the "N" word or spic, or any other negative terms to refer to one's race. Those aren't acceptable terms and that is how the "R" word is to us in the special needs community.

For those who know Jesse it's easy for me to explain why it's wrong to say. I mean if you know Jesse you would probably do anything to protect him because you know he's the sweetest, most amazing lil' man ever. I normally just explain it as how would you feel if someone called Jesse retarded? Most of the time the response is I'd kill them, or kick their butt, or I'd be pissed. Well when you use the "R" word I see it as you are slamming MY son. MY pride and joy is the one you are attacking when you so lightly throw that word around.

So please think about how your words affect those around you before you speak. My son can't defend himself, it is up to me to stand up for him. So I'm standing up for my son and I'm saying it's not okay for you to use that word and I will not associate with those who use it.
Posted by momtojesse at 2:00 PM 1 comment:

Last week we finally made the move from VA to MI and let me tell you I am sooooo glad to be home. I have spent the past week catching up with family and old friends. I took Jesse to put flowers on my moms grave on Sunday for Mother's Day. I really needed to do that.

I've gotten to spend some time with my younger brother Sean and let me just say I am so proud of the man he has become. Jesse just adores his Uncle Sean and I think the feeling is pretty mutual. Jesse and I also have a new morning routine. During the weekdays my best friend Kristy stops by for coffee.

I had a meeting with the school about Jesse and am proud to say that there is a good possibility that Jesse will be in a General Education classroom because of how well he's doing. I'm so proud of my little man. He is making such great progress in all areas. I'm especially proud of his manners. He can be the most polite little guy ever. He is also talking up a storm these days and I love it!!!! I'm so excited to see how much more progress he will make now that we are here in Michigan and our stress levels are lower than they were in Virginia.

Anyway, it's getting late so I'm going to sign off for tonight.
Posted by momtojesse at 10:29 PM No comments:

I'm back and we're alive 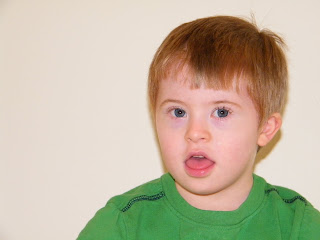 I know I haven't been around for a while, but things have been pretty crazy. I don't have much time to post right now, but wanted to leave a post letting everyone know that we are doing well and I will be back to posting soon. Until then I'll leave ya with a updated picture of Jesse.
Posted by momtojesse at 3:27 PM No comments:

First time playing in the snow!

Jesse had a blast. He didn't move around much, but sure did bend down to play with it. He is definitely a true Michigander at heart like his parents.

Make video montages at www.OneTrueMedia.com
Posted by momtojesse at 11:22 AM No comments:

Jesse is starting to read

Ok so he's only reading a few words, but hey he's 4 so that is totally amazing right? Jesse amazes me every day. Each milestone is such a big deal around here. I remember when he first walked I shrieked and started crying and well it scared him so he didn't walk for another 2 months, but wow it was like the best thing ever and we worked so hard to get to that point. Now he can read his name, yes, no, stop, go, and bus. We got him some flip books that have the word and a picture with it from The Lakeshore Learning catalog and I love watching him point to the letters of the words and say the letters. He is so excited about learning and I love that about him.

Now I'm off to clean up the mess Jesse left for me when he went to bed. I'll try to post again soon.
Posted by momtojesse at 8:27 PM No comments:

momtojesse
Michigan, United States
I'm a 35 year old mom to the most amazing kid ever who happens to have Down syndrome. This is our blog sharing our experiences with homeschooling and just every day stuff.

The happiest day of my life 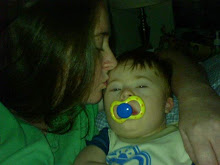 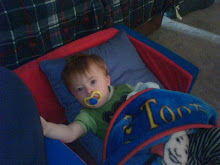